Pyro type effects minus the explosives.

We've all been there, you're doing a production and there is the perfect moment for some glitter or confetti but your director says no, he's afraid you'll blow up the cast. You try to explain that it's perfectly safe because there are so many safeguards in place, no one is going to explode, they won't be even slightly singed.

Your director says you couldn't possibly because you'd scare the audience. You decide not to mention that a well timed bang might actually jolt the audience awake after drifting off in the third hour of the second half, but you decide not to for fear of being yelled at... again.

If you have experienced this problem then we have the perfect product for you - handheld confetti cannons. 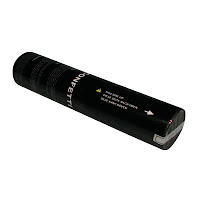 Available in white, white and silver mix and multi-coloured the hand held confetti cannons are perfectly safe to use and pose no danger. Handheld cannons are single use cannons pre-filled with confetti or streamers. The lowest part contains a pressurized nitrogen cartridge. Easily twist the lowest part of the cannon to the left and the confetti or streamers will be launched into the air.
Easy to use, and a great effect. Handheld cannons are available in 28, 50 & 80 cm. Confetti and streamers are flameproof according to NEN-EN-ISO 6941 and we can even provide you with an official test report if you needed.

Once your director has agreed just remember to practice the following phrase: "I'd love to help you clean up the mess after we've fired the confetti cannon but I can't because my *insert name of illness* is playing up - sorry!"