Or Macrame for sound technicians


We've had a couple of customers lately have problems with hired loop intercoms and sales microphone cables - one of them ended up using hand signals whilst the other was inadvertently doing Norman Collier impressions.

It was only when the sales customer bought his cable back to be repaired (he'd only had it a few weeks anyway) that the cause of his misery became apparent - he produced from a carrier bag a tangle of cable that was only just recognisable for its newness. Just looking at the cable we could see a couple of bulges in the outer and because we took pity on him (he had just spent several hundred pounds with us) we replaced the cable with a gentle admonishment to coil it properly and it would last longer.

Our hire customer came back to us having used our cables to run the intercom he hired from us and then suffered low volume on one leg of his loop and intermittent contact on the other. We refunded his hire as a gesture of goodwill (he's a nice loyal customer and he's referred other customers to us) with a promise to check the system and repair it. He was adamant that the beltpacks were faulty, his rudimentary fault finding pointed at them - politely I suggested that it was a cable problem, 98% of comms problems are.

I tested the system the next day, sure enough - the beltpacks, headsets and masterstation worked but when we tested the cables we found two faulty. One was a broken connection inside the XLR, the inner core had been overstripped and held on by a whisker which finally gave up. The other cable had an intermittent break partway down - it showed as OK some of the time on our basic tester but when the cable was twisted it failed. Close inspection showed the sheath from one of the inner cores had split and the copper was protruding when twisted and shorting to the screen.

It's not just sound cables

We hire out a lot of cables over the course of a year and all of them go out neatly rope coiled - they're easy to count and easy to guesstimate their length if the ID sleeve gets damaged. When the cables return to us it's always a different story - cables are wrapped around each other, coiled like a skein of rope, coiled and secured with masking tape or sellotape. Don't get us started on the cables that come back covered in gaffa tape residue or brown parcel tape gunk... Of course, we're going to unwrap the cables and recoil them anyway but the point of concern from my point of view is the unseen damage that can occur from badly returned cable - it may not be readily apparent until it's too late. Our visual check of mains cables as we coil them catches damage to the outer sheath and the plug/ socket but anything happening internally won't come to light until it fails - perhaps during your show. If the cable is coiled nicely, then there's a lot less chance of it failing and with a mains cable there's a chance that something nasty could happen when it fails.

It's quite simple when you think about it - any cables you have (not just ours but yours too) should be rope coiled before you store or transport them. Not sure what I mean by rope coiled - then have a look at this video?

Once they're coiled - secure them tightly with PVC Electricians tape - not Gaffa, sellotape, glittery pink tape or masking tape. If you don't have any PVC tape - we always have it on the shelf and it's not expensive to buy or keep in your box of bits.
Not sure whether your cables are ok or not? Buy a cable tester, they're not expensive and could save a heap of woe - from experience it's mostly sound cables and control cables that cause the most aggro, especially the sound cable that gets used to connect the lighting desk to the dimmers. 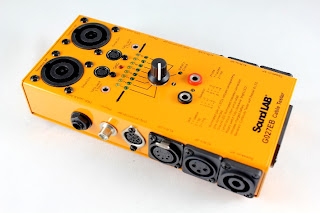 I bought myself one of these - it tests XLRs, speakons, DMX cables, 8pin DIN cables and gives a visual indication of which pin is connected where.
Mains extension cables are easy to check - pop the cover off the plug and socket and check terminals and wire are tight - if still faulty then use another but this isn't so easy to do with XLR cables if it's Saturday night and B&Q is closed.
Still not sure how to rope coil a cable? Ask us to show you when you next visit us to collect or return a hire - we'll be glad to show you how, ultimately it will save you and us some aggro.
Posted by Unknown on Thursday, June 20, 2013