There's been much made of the digital switchover for TV and the migration of licensed radio mikes to Channel 38 but the paradox has been that (by & large) to date - most radio microphone systems have used an analogue transmission system..

It looks as though it's about to turnaround though as Audio Technica launch their System 10 in to the UK. 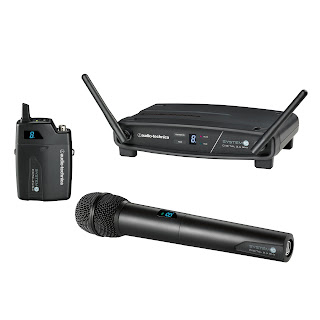 8 channels can be used simultaneously without crosstalk issues that you might normally face, and the system operates in the 2.4gHz range so for the moment licences aren't needed. The only caveat could be that the human body attenuates these frequencies a little more than you would expect so locating transmitters on performers and the corresponding receivers may take a little more effort than normal.

The receivers have balanced XLR outputs and 1/4in jack line out and the bodypak transmitter uses the same HiRose connector as other Audio Technica systems so you can swap capsules between systems. In terms of price - they compare favourably to other systems in our range and whilst not cheap - they are an Audio Technica product so not horrendously expensive for the quality you're getting. They're listed in our eShop here and if you'd like to see the techie figures then the Audio Technica product page is at this link.

The plan is that we'll also take some of these units in to hire, along with our existing channel 38 systems it means we'll be able to offer simultaneous working for up to around 18 channels without costing horrendous amounts of money - start planning those spectaculars now!