We've just installed our first Pathway Cognito desk to a school in Birmingham. We first came across the desk when City Theatrical asked us to take on a dealership - I saw it in the catalogue and asked for a demo of the beast. It's turned out to be an impressive little desk.... 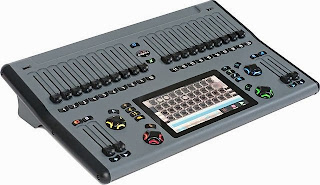 The picture above isn't big so detail is hard to make out (don't worry there'll be a link to its product page in a moment) but essentially it give you 20 faders to control intensity and generic channels, 4 rotary encoders that change function according to context and a touch panel to select fixtures and do other desk functions.

The school we've supplied it to chose the Cognito over a Zero88 Jester mostly because of the touch screen that will let them preset scenes for staff to playback quickly and easily. It's controlling 12 channels of generic lighting, two LED moving head fixtures, some RGBAW LED Pars and a couple of DMX club effects (for school disco's). Setup and patching was easy as the desk gently leads you through a path of choosing a channel number, fixture type and then DMX address. It has a built in fixture library with over a thousand fixtures already defined and enough generic fixtures for multi channel control of LED's that I left our customer happy with the control over his Visage LED's until he could eMail Pathway for a fixture personality.

The desk comes in 3 versions - Basic, Pro512 and Pro1024 - our customer bought the basic version as they didn't need the Ethernet or RS232 option or the two universes! The connectors are all on the back panel - if you decide next year that you need Artnet or Midi then you can simply buy a software key to unlock those features.

As promised - here's the product page link here and here's the link to our online shop so you can get an idea of pricing click here.

Trade pricing and educational pricing is available - give the shop a call and talk to someone in sales.

Not another wash light?

We had an interesting meeting last week with the company that supplies a lot of the LED Fixtures that we sell, the main purpose of the meeting was to show us the new 'Intense' wash lights that are headed for the UK.
﻿
﻿
It looks like some other 'compact' wash lights that are in the UK but this unit is different in that it has 5 colour LED's.

The case is finned to aid cooling because this unit has no fan to cool the LED driver (fins means that the case has a larger surface area so better cooling) so it will suit small studio spaces or even small theatres perhaps.

The LEDs are Red Green Blue Amber and White (hence RGBAW) so that you can mix some nice pastels by using the white element but then add the amber element to get a tungsten looking white. All of this under DMX control using 5, 7 or 9 channels so quite compact from a control point of view. In 9 channel mode there's a DMX channel that has preset colours too which means that if you need a light pink for your wash - you just send the unit a preset value.

It's a 25 degree beam so over a very short throw it's not going to do much, but over a 10 to 12 foot throw it's giving a beam something akin to a 500w Fresnel with perhaps 75% of the intensity. Obviously trying to pair it with a Fresnel would be a problem but running pairs of them would obviate the issue.

The unit is expected to sell for £183 (plus VAT) and won't be available until later this month. If you want to know more about the unit then have a look here - the manual is worth a download too. You should note that although the case looks chunky and durable (and it certainly feels chunky) despite appearances it is NOT IP rated so you couldn't rig it outside and leave it there in all weathers.

As well as the rather nifty looking washlight above, there's also an effects version of the intense - more often referred to as 'eye candy' - intended for situations where the units will be visible to an audience e.g rigged as backlights or side washes.

﻿﻿﻿﻿
﻿﻿﻿﻿
The 19T3 unit has simpler 3 colour units giving only RGB mixes of colour, but the case is the same which means no fan for quieter rigs. This unit has even more options for DMX control - having 3,6,9 or 11 channels of control. In the 11 channel mode you can address the outer, middle and centre rings of the fixture individually for eye catching rainbow effects.

Because it's a more densely packed fixture (from the LED point of view) it has a wider beam angle so may be slightly more useful if having a decent 'true' white isn't essential for you.

There's more info on it here and again the price isn't that expensive - £166 (plus VAT) and again there should be stock available at the end of the month.

To complete the Intense family there's a third unit which has two colour LED's to give Cool White and Warm White colour mixing - for situations where you want coverage, low energy use but colour isn't essential.


Again, it has the same finned cast housing for convection cooling, so it's going to run cool most of the time. Because the unit uses two colour LED's they're not as densely packed as in the 19T3 but the separation helps the beam angle - 29 degrees. DMX control is simpler being either 2 channels or 4 channels - 2 channel mode gives control over the cool & warm elements of the LEDs so that you can mix your own colour temperature whereas 4 channel mode gives a channel for preset colour temperatures.

In keeping with the rest of the range the cost is low - £141 (plus VAT) and as with it's "brother" units there will be stock around the end of this month. For more details (and to grab the manual) have a look here.