Fancy a Six pack for the New Year?


We blogged a while back about the new SGM LED fixtures that were in design and coming in to production and the latest one to join the 'new' family is the SixPack and already it's making an impression with TV lighting designers and event companies. 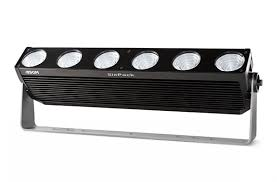 The SixPack is an IP65 rated 6 cell LED blinder come cyc wash unit using COB LED's with a dished lens on the front to help soften and blend the light from the cells. It's a relatively narrow beam of 13degrees but it does mean that the beam throws a long way up a tall building or to light from a tricky rig position. Again, being LED the whole device is pulling about 240w with everything on and it can rigged using cunningly designed fittings to form a pixel wall or a straight line - individual cells are addressable so you can pixel map video on to it as well.
Having seen a demo unit in our shop, it looks really bright and the dimming curve has been designed with 16bit resolution in mind so that the last 10% dims smoothly too. It's often a niggle with LED's that they look good on stage but when dimmed, they chop out around 5% intensity because of power supply constraints. The SixPack also has a Halogen Emulation Mode where the unit will mimic the rise/decay curves of a conventional halogen fixture for when you're using a mixed rig.

Like it's brother unit, the SixPack also has an RFID module so you can configure the units DMX address and so on by remote. The backpanel also has display invert and pixel invert functions from easy to access key presses so that no matter how you end up rigging it, you can set it up easily.
We don't have them in hire as yet but there are some companies that do have them, so we can get them for you if they're that special something you need. If you'd like to see a demo of the unit, then we can arrange that too - SGM are very enthusiastic about this unit and think it's going to change the way folk look at LED. Of course you could buy them - list price is £2600 (plus VAT) but I'm sure if you were looking to buy a few then we could look at the price for you as well.

An old friend with a new body!

As LED PAR cans made their way in to our sales range about 3 years ago, we struggled for a little while to find a cheap DMX desk that could control them and provide some of the functionality that small drama groups and schools would need i.e. fader per channel, ability to store memories and basic chases.

We eventually discovered an offering  from Botex that cropped up in a variety of guises (as it turned out) that we could buy from the same supplier as our LED PARs and we sold a couple of dozen of them which are continuing to serve faithfully. As is often the way with this technology, the experience of selling a few thousand informs the next 'generation' of the family and in December we were introduced to the Scene Commander.

As with it's predecessor, it's a 12/24 desk which means you can operate it in 12 fader two preset mode or with the press of a button in 24 fader two preset mode (though it stretches the brain remembering what's where on the faders). In this version also, the faders can re-assigned within the DMX range of the desk i.e patching so that you can bring together common features on things like LED's or basic moving heads. It also has two rotary auxiliary controls which can patched to a DMX channel so you get more accurate control over strobe flash rates (for example).
﻿
The desk is housed in a metal case and can be rackmounted if you so wish, but many folk won't bother and the metal case gives a feeling or sturdiness it's predecessor was missing.  It outputs DMX so should work with most DMX devices and for the first time in this price range, comes with 5pin and 3pin outputs on it's back panel! 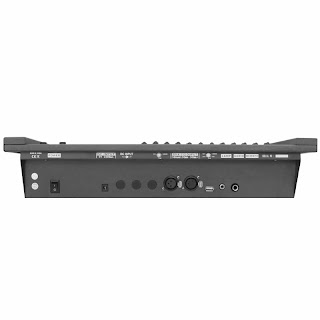 It also has a USB connector to power a desk lamp - though you might be courting fate to try and charge a device from that port. There's also an audio input so that you can run chases to the beat of a soundtrack and a remote control input for a foot switch to allow you do remote blackouts.

All in all, we think it's rather a neat desk for £135 for 24channels of DMX control, if you'd like to have a close look at one - we have one on display in our shop. If you want to order one, they're on our eShop here.
Posted by Unknown on Wednesday, January 15, 2014